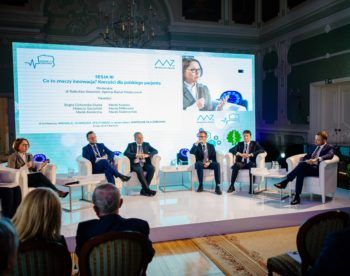 President Marek Konieczny as a panelist in a social debate “Together for Health”.

On the 8th of May 2019  in Białystok  the President of KO-MED Centra Kliniczne, Marek Konieczny participated in an important social debate Together for Health started by the  Minister of Health, prof. Łukasz Szumowski and organized under the Minister’s patronage. The debate was organized as a part of 6th Conference called  Innovations, Technologies, Efficiency.

According to dr. Konieczny innovation means willingness to change something, courage and determination. Innovations in healthcare are possible in Poland, in dr. Konieczny’s opinion, thanks to consistent implementation of Prime Minister’s strategy by the present Minister of Health. An example of innovative approach to Polish healthcare is creating Medical Research Agency.  During his speech, dr. Konieczny stressed the fact, that KO-MED CK implements innovations in public hospitals and because of that he has great hopes for medical Research Agency which can have considerable influence on the process of innovation development in Polish hospitals.